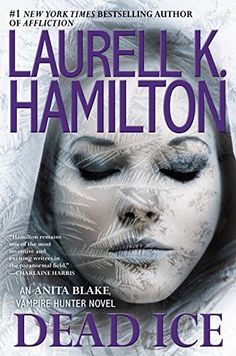 Dead Ice is a great mix of paranormal plot and serious sexual adventure.

Laurell K. Hamilton does paranormal romance like no other.  Anita Blake is a necromancer that raises the dead and has more vampire kills than any other U.S. Marshall.  She also holds the lycanthrope powers of various shapeshifting animals.  Her metaphysical powers increase throughout the series.  She’s engaged to the head vampire of all of America, but is also romantically involved with many others.  It’s not these facts that make Anita Blake such an interesting character but rather the manner in which she treats others.  She’s tough, she’s intelligent, she’s blunt, she’s fair, she’s accepting, and she knows how to put someone in their place.  Anita is the epitome of being open and tolerant.

The romantic plot of Dead Ice centers around trying to figure out who should be included in a commitment ceremony with Anita Blake.  Let’s face it, there are a lot of men (and a few women) in Anita’s life from which to choose.  Surprisingly for the number of sexual partners that Anita has, she really doesn’t openly engage in sex with someone she doesn’t care about.  She has partners in her sex life that are initiated by love and others by power.  But she always deeply cares about those with which she sleeps.

The author attempts to explain the basic nature of the polyamorous relationship.  “Poly isn’t about being completely fair for most people.  There are some who run it with near perfect equality, but for most of us there are primary relationships, there are secondary, and even ones less serious than that.”

By the end, the marriage and commitment ceremony have yet to take place, which leaves the reader wanting to read the next in the series.  A lot can happen in a single day of Anita Blake’s life.  I’m looking forward to the next book.

I’ll have to say, I wish I had a relationship tree to follow all of Anita Blake’s relationships.  This is her 24th book and as the series continues so does Anita’s list of sexual partners.  I read the first 17 books in a binge reading session – the series is addictive.  But now, that I’m reading the books as they are published, my time between reading each has increased.  It makes it harder to recall all the characters.