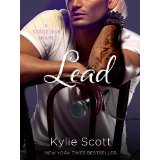 This is the the 3rd in the Stage Dive Series.

Unrequited love is a bitch!  If you have ever been in that position, enough said.  If not, kudos to you.

Lena signs on to look after Jimmy and make sure that he stays sober.  Lena is a quick-lipped character with enough chutzpah to stand up to the famous rock star.  He’s an irritable handful – only being 6 months sober and going on a self-imposed celibacy stint.  He also had a very rough upbringing that makes it nearly impossible for him to recognize love.  David, Jimmy’s brother, begs Lena to forgive Jimmy’s screw-ups.

“Don’t break his heart, Lena.  Fuck, he barely even knows he has one, but he does.  And it’s actually a really good one.  Just give him a chance to figure out what to do with it, please?”

Kylie Scott’s words reach out and pierce the heart as Lena admits that she has feelings for Jimmy, but knows she has to leave him to save herself.

See my other posts about the Stage Dive Series.