Another hot biker book by KA.  Her books are absolutely addictive.  The bikers are very upfront with their emotions.  They say exactly what they mean.  It may be hard, it may be crass, but it is always real. 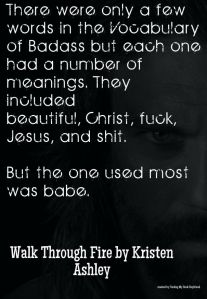 While there usually isn’t any game playing between and a biker and his babe, Logan is upfront about the game he is playing with Millie.  The secret between them is a wall that is keeping them apart, but the sex in the interim is phenomenal.

I love how KA writes and creates her MC world.  She never fails to give her characters individual voices.  Logan defies some of the usual biker traits.  He’s attracted to Millie, despite the fact that she doesn’t dress like a traditional biker babe.  His non-confrontational relationship with his ex-wife is pretty amazing, too.  But don’t get me wrong, Logan defines a silver-foxed hot biker.  His basal attraction for Millie and constant “sex on the brain” makes the reader sweat with need.

Millie is strong, successful, and loving.  She’s willing to sacrifice everything in herself for someone she loves.

This is the first romance book that I have read that realistically represents a modern-day, combined family trying to work things out.  The creativity and effort that it takes to make such a family work well was remarkably portrayed in this book.

Finally, I adore the relationship or lack there of between Logan and Alan, Millie’s brother-in-law.  The mutual lack of respect is humorous.  Logan’s final triumph put a huge smile on my face. 🙂

Kristen Ashley’s books are amazingly hot.  It’s all about need, passion, desire, living in the moment, and there’s never any doubt how the male feels about the woman.

Ride Steady is about a man named Joker, aka Carson Steele, that was abused as a child and fell in love with a girl named Carissa Teodoro when he was a teenager.  Years later, he reconnects with Carissa when he finds her on the side of the road with a flat tire and an infant.

The dialog in the book is infectious.  First, it is very funny how Carissa starts charging Joker for every time he curses.  Second, while the language used by the Chaos crew may not be clean, the meaning is always clear.  Joker is short on words but communicates with certainty.  When he speaks I could hear the song “More Than Words” by Extreme in my head.  An added bonus in the book, Tack is a substantial side character.  He is crass but wise and it was great to see his character again.

I love how the Chaos family champions the relationship between Joker and Carissa.  It takes a push from family to make a person find the happiness that they deserve.

This story does have drama caused by a pain-in-the-ass ex-husband of Carissa and there’s always drama with Chaos.  But what struck me as unique was how their relationship grew not primarily out of the drama but on the day-to-day life.

Finally, the ending was perfect and Joker and Carissa find their Beautiful Life.

I think Joker should get this tattoo, as he refers to Carissa as Butterfly.

Once you get acquainted with the biker-lingo, you won’t be able to put this series down.  It is incredibly hot how the male characters in this series can convey emotion and intent with so few words.  They say what they mean.  There are no head games or trying to read between the lines.  While it is done in a very bossy sort of way, it is also refreshing and provocative all at the same time.

Despite being curt with his words, Hopper Kincaid is great at manipulating situations.  He is able to cloak an invitation with a compliment while making it impossible to be refused.  The best part of Hop is that he is astute enough to see through Lanie’s issues in her head that she doesn’t even understand herself.  He may seem very rough on the outside, but how much thought he puts into Lanie’s feelings, it is obvious that he is actually very caring.  When Lanie doubts Hopper, Hopper responds, “Lady, I’m as real as it gets.”

Lanie is beautiful on the outside, but her road to becoming strong and healthy on the inside make her even more beautiful in the end.  I love how she finds strength even when she is almost paralyzed with doubt and fear.

By the way, the heat in this book is off the charts.  What a great read!