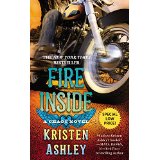 Once you get acquainted with the biker-lingo, you won’t be able to put this series down.  It is incredibly hot how the male characters in this series can convey emotion and intent with so few words.  They say what they mean.  There are no head games or trying to read between the lines.  While it is done in a very bossy sort of way, it is also refreshing and provocative all at the same time.

Despite being curt with his words, Hopper Kincaid is great at manipulating situations.  He is able to cloak an invitation with a compliment while making it impossible to be refused.  The best part of Hop is that he is astute enough to see through Lanie’s issues in her head that she doesn’t even understand herself.  He may seem very rough on the outside, but how much thought he puts into Lanie’s feelings, it is obvious that he is actually very caring.  When Lanie doubts Hopper, Hopper responds, “Lady, I’m as real as it gets.”

Lanie is beautiful on the outside, but her road to becoming strong and healthy on the inside make her even more beautiful in the end.  I love how she finds strength even when she is almost paralyzed with doubt and fear.

By the way, the heat in this book is off the charts.  What a great read!