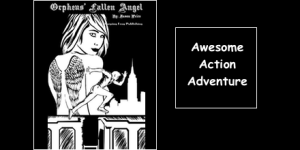 I’m not a huge action adventure fan. That being said, the author did a great job of describing scenes with a freshness that kept me engaged. That’s quite a feat as I can get bored rather easily.

One of the many adversities getting in his way is Moth, a lower-than-low level criminal with delusions of grandeur and Lady J, a high level shot caller who is second-in-command to Boss Creeg, the most powerful crime lord in Plutopolis.

Orpheus does however makes a few friends along the way, such as SpiderBat, a super-vigilante skilled in combat and stealth, the Huntrix, a leather-clad dominatrix-styled bounty hunter, and the Swan of Death, a sexy female ninja assassin.

During all this, Angel herself has been captured and suffers at the hands of the sexually sadistic Lady J. Can Orpheus rescue Angel before Lady J sends her to the waiting hands of Boss Creeg or will he have to deal with the crime lord as well?