Skip to content
HomeHud Saunders – The Beasts of Belmont Park 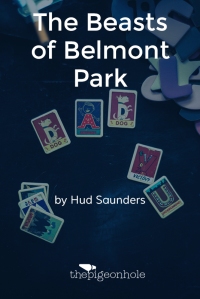 Paul Marston is an out-of-work actor struggling with the hardest role of his life, being a stay-at-home dad. While he’s changing nappies, his wife Laura Holland, a famous author, is wrapped up in a world of boutique book festivals and champagne receptions.

Then a drunken post-pub party rears its head, and Paul falls full tilt into a bizarre world of drugs, gangsters and high-stakes fishing. This family confessional flips the lid on the middle-class dream and grinds its boot into the new-daddy dynamic.

This is an Antiromantic book.  (It is an actual word – I checked the dictionary).

This book is antiromantic because it centers around a couple whose marriage is faltering.  Both husband and wife consider having an affair.

Normally, I wouldn’t share a book like this, but the fact that around 50% of marriages in the U.S. end in divorce, I felt compelled.  Surprisingly, both the man and woman struggle with the notion of actually engaging in sex outside their marriage.  It is this resistant struggle that made the book  interesting.

This story was anything but simple.  There are in fact a lot of mixed plot lines that carry the story.

Based on the ending, I hope the author plans on following up with a sequel.

A born and bred West Londoner, Hud realised from an early age he wanted to be a writer. Yet despite this aspiration, he turned his creative energy towards music following a fateful encounter with a folk guitarist who also claimed to be a wizard. Becoming a father to a daughter aged 22 meant that while he pursued this fascinating but largely fruitless career, he donned many other hats in order to pay the bills, including decorator, dispatch rider, software salesman, and professional rebirther, as well as songwriter, producer and rock band manager.

His writing break came as a script editor working on independent films, but finding this too limiting, he turned to writing screenplays himself. Within a year he had an agent and a contract to write the potential blockbuster movie Brothers in Arms for Moulin Rouge producer Martin Brown. After a year in Australia trying to persuade the two outlaw motorcycle clubs involved to agree on the screenplay, Hud returned to the UK chastened, but definitely a writer.

Several screenplays and a computer game followed as well as a fruitful role as Creative Consultant on the Grammy-nominated cult music documentaries 1 Giant Leap and 1 Giant Leap: What About Me? In the past he has run and facilitated men’s groups and workshops. Since then he has founded a successful writers’ group in Queens Park where he lives and has taught Creative Writing to people of all ages and from all walks of life.

Profoundly influenced by his childhood with his radically feminist single mother, Hud is an ardent equalitarian who has been deeply inspired by all the women and the men in his life. His first novel The Beasts of Belmont Park reflects this even-handed approach – none of the characters come out looking good!