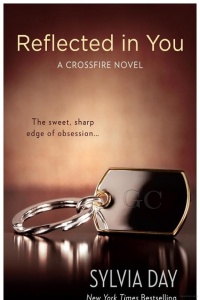 After recently gifting Bared to You to a relative, I couldn’t help myself and go back and read it again.  Well, once I finished it, I continued with the next, Reflected in You.  I was enjoying myself too much and I finished the rest of the series.  While I don’t choose to actually rate the books I read, I would certainly give this high reviews.  It fits the criteria: (1) page-turner/can’t put down (2) want to re-read (3) would gift to a friend.

This series is listed on many sites as something to read after Fifty Shades of Grey.  I prefer not to compare books for a number of different reasons.  I know a lot of people disliked Fifty and I wouldn’t want people to be hesitant to read this series because they disliked FSOG.  I’ll refrain from comparing these two series even though there are a number of similarities.  But simply, if you like a book with a lot of seriously steamy scenes – read this series.

Their couples therapist isn’t certain that their indulgence in sex is actually healthy.  They both refuse to try abstinence to address their issues.  Gideon and Eva share a similar troubled past and a relatively similar taste for the rich and fancy.  They face constant problems as a result of their pasts and can’t seem to catch a break.

In addition, the side characters are fantastic.  Cary, Eva’s best and purely platonic friend is great.  He’s flawed but lovable none-the-less.  Hopefully he’ll get his happily-ever-after in the final installment.  Gideon is generally very supportive of Eva’s relationship with Cary.  But at one time he suggests that Eva might be better off without Cary in her life.

There is fifth book expected to be released, which I fully intend on reading – One With You.  No release date has been set yet.