Review of Story: I truly enjoyed the story. The story unfolded sweetly like a blooming rose. It was sweet like the scent of rose. It had some intensely difficult part to read like the thorns on a rose bush. I love the baseball backdrop for what amounts to a clean romance with the theme of conquering one’s past, with an added splash of the trials and tribulations of dealing with those with alzheimers’s . Roberta’s past was well constructed. Unlike most history of domestic abuse characters this character included a bit how she dealt with the issue before meeting the love of her life. I liked that there wasn’t anything simple about this character. Luke’s character was a bit more straight forward. I liked the realism that he was a minor league baseball player and not the tallest of the lot. His heart made him a very lovable character.

Review of Audio: Gary Furlong did a nice job of narrating Luke’s character. His voice and delivery seemed to compliment Luke’s easy going character and warm nature. Unfortunately, I can’t say the same for Aundrea Mitchell’s audio part for Roberta. The cadence of her voice made it agonizing to listen to her speak. She literally pauses after every grouping of 3 to 4 words. The repetition made it tiring to listen to her chapters.

I always finish every book that I agree to review. This book was difficult to finish because of Aundrea Mitchell’s poor audio part.

LOVED the BOOK; LOATHED the AUDIO

Underdog Luke “Single” Singleton is yearning to make a comeback. After getting hit in the neck with a pitch—an injury that nearly cost him his life—he has one last chance to play for his hometown team, the Stockton Beavers. But his mom has Alzheimer’s, and he’s all she has to depend on. How can he pursue his career, much less someone special? Personal care aide Roberta Bennett is done dating baseball players. Having had her share of heartbreak, she heads to Stockton hoping for a fresh start. But after she finds Luke’s mom outside, lost, and alone, she can’t refuse when he hires her on the spot. Unbeknownst to Luke, Roberta is all too familiar with the violent tendencies of the pitcher who hit him. Now that they’re living under the same roof, the last thing either of them is looking for is a relationship. But it’s not long before they find themselves drawn to each other. And right when Luke is thinking about finally making a change to his single status, a secret from Roberta’s past emerges with the power to tear them apart. 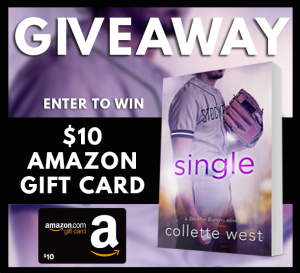 to Collette West!
About the Author
Collette West grew up as somewhat of a jock-nerd hybrid. Entering the world three weeks premature, her dad nearly missed her birth because he had seats behind the dugout for a sold-out, highly-anticipated match-up between two of baseball’s biggest rivals. Not to be outdone, her book-loving mom taught her how to read by the time she was three. A love of the game coupled with an appreciation for the written word were instilled in Collette‘s impressionable brain from a young age. No wonder her characters believe in the philosophy: sports + romance = a little slice of heaven.
Splitting her time between the Pocono Mountains and Manhattan, Collette indulges her inner fangirl by going to as manygames as she can from hockey to baseball and downloading every sports romance novel in existence onto her iPad. When she’s not clicking away on her laptop, she enjoys walking her dog in Central Park, satisfying her caffeine craving at the Starbucks on Broadway and keeping an eye out for Mr. Right. But above all, she loves dishing with her readers. Email her at collette_west@yahoo.com.
She is the author of the New York Kings series which includes: NIGHT GAMES, GAME CHANGER, GAME ON, PERFECTGAME, INSIDE GAME and GAME WINNER.
Newsletter: http://eepurl.com/OetSj
Facebook: https://www.facebook.com/pages/Collette-West/537935442972229
Twitter: https://twitter.com/Collette_West
Goodreads: https://www.goodreads.com/author/show/7539982.Collette_West
Narrator Aundrea Mitchell

After receiving her B.S. and MBA Aundrea fell madly in love and decided to start her family. Ten years and five children later she was quickly living the full time wife, mother and household management life. Needing a temporary escape from time to time Aundrea returned back to her first love – reading! After devouring everything she could get her hands on she thought, -what if she could mix her love of performance and literature in a professional capacity? Once getting involved in the world of book narration she quickly became hooked and when not with her family you can find her in her studio working hard to grow in her own storytelling abilities.

Narrator Gary Furlong
Gary is an up and coming Irish Audiobook narrator and Voice Actor. He has a true flair for accents and dialects and has lived all over the world including Japan, Ireland and Texas. He can make listeners laugh, cry, seethe, think and feel and loves working with authors and writers to bring their message to audio! Gary has over a decade of experience as an actor and improv artist. Do not be fooled by his rugged handsome exterior, on the inside he is even more rugged… too rugged really.  It’s becoming a problem.
Facebook: https://www.facebook.com/GaryFurlongVoice/
Twitter: http://twitter.com/gary_furlong