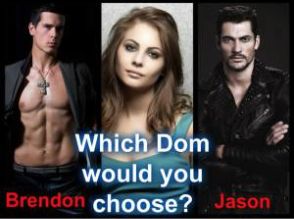 Susie’s war in her head between choosing to be with Jason or Brendon continues in Time On Elimination Final.  She left the hands of one Dominant to the hands of another.  While Jason does have his own playroom, his style of dominating Susie is vastly different than Brendon’s abusive manner.  Jason certainly has his priorities in order, “Seeing to [Susie’s] sexual pleasure – in every conceivable way[.]”  He likes to keep his rules simple: trust and respect.  Jason seems to be the right choice.   He’s hot, amazing in bed, caring, considerate, and openly admits his love for Susie.  However, Susie can’t get thoughts of Brendon out of her head.  She also can’t seem to reciprocate the intensity of Jason’s love for her.  Her conflicts aren’t just between two men.  She isn’t even sure if she is cut out for being a submissive.  Jason starts to doubt her commitment to being a submissive.  Was it just a passing phase?  Was she just dabbling?  To make matters more confusing in Susie’s mind, Brendon is seeking therapy to cure his overly jealous and aggressive nature.  Even more so, he’s willing to give up all the painful types of kink for Susie.

Why can’t Susie seem to rectify her feelings?  It’s difficult when love is defined with feelings in your heart and not a quantifiable list in your head.  This difficulty is what makes this book a great read.

While this is the fifth book in the Playing the Game series, it can be read as a stand-alone.  The author does a fantastic job of recapping the story at the beginning.  Whether you’re new to series or just have forgotten what happened in the last story – not a problem.

Bonus: Book includes an excerpt form Grand Final “The Last Game.”  Be careful reading this, it ends with a cliff hanger that could lead to death in waiting in anticipation for the final book. 🙂